The 360X Experience captures a slow motion video from all angles.

Guests stand on a platform using a slow motion arm to circle automatically around them.

The result? Awesome branded content that can be shared within seconds.

The most versatile booth available – featuring compatibility with many different versions of photo capture technology.

Whether you are using a smartphone, iPad, GoPro or DSLR camera, you can be sure the 360 photo booth will support their weight.

You are in full control – adjust the timing, speed, and ramp-up of the arm. Trigger both the arm and the recording with a single button press; we’ve made the experience of running the event hassle-free and smooth, reducing the risk for error and streamlining everyone’s experience.

The bleeding-edge design of the 360X provides an affordable, compact, and fast photo technology that users will adore.

With the rise of iPads in photobooths, we’ve implemented them into our DSLR-based design flawlessly.  Now both the DSLR and iPad variants of our booth are streamlined and painless to set up, test, and run.

We’ve kept it simple, so much so that you can set up the 360 photo booth faster than you can make yourself a cup of tea.

Be the envy of all your would-be customers: utilise the social media of your users as free advertisement in a win-win scenario: they share gorgeous 360 content, and your branded outputs show your company name in all its glory.

This is the perfect solution to corporate events driving engagement, or social media savvy brides and grooms.

Quick and Easy Set up

The bleeding-edge design of the 360X provides an affordable, compact, and fast photo technology that users will adore.

With the rise of iPads in photobooths, we’ve implemented them into our DSLR-based design flawlessly.  Now both the DSLR and iPad variants of our booth are streamlined and painless to set up, test, and run.

We’ve kept it simple, so much so that you can set up the 360 photo booth faster than you can make yourself a cup of tea.

Make your mark with the 360 photo booth. Physical and digital branding is simple, but extremely effective.

Vinyl wrapping allows the platform to draw attention and intrigue, while catering to any event.

Brand your moving content with overlays, and add intro/outro clips to your content to make it unforgettable.

Here at Dreambooth we believe in world class support. We have a full support team who can answer all the questions you might have about the 360 photo booth, giving you true peace of mind at an event.

We can support you online by phone, online chat, email, or WhatsApp. 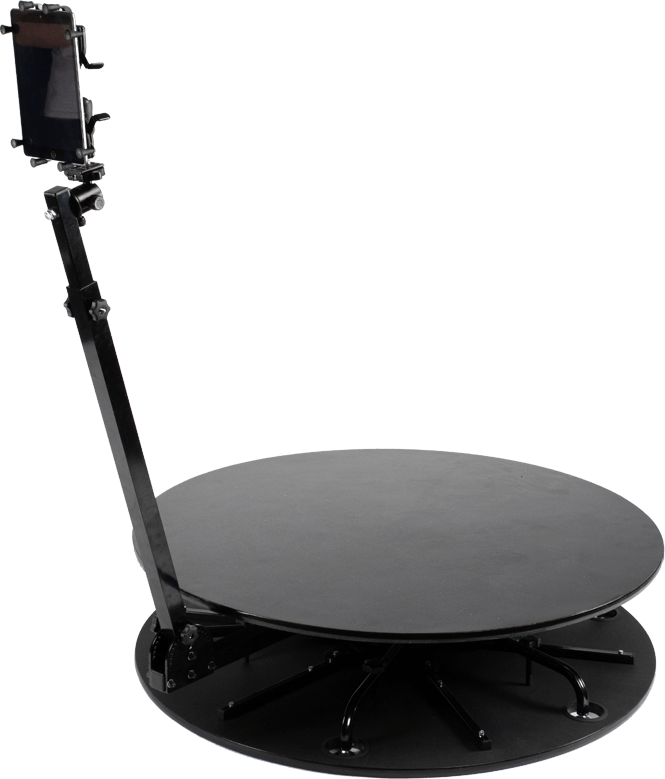 Includes software – For either DSLR or IPad version

Add either iPad Pro
Or
Laptop and Canon DSLR Camera

Yes, we supply feature-rich software for both our DSLR and iPad packages. So, you can add effects, branding, music, and more!

You can fit up to 4 people on our platform! We think having a group of people on the platform makes for a great 360X experience.

We provide you with a dolly that allows you to wheel your booth around. This makes it much easier to move in and out of venues. See video here.

The minimum space requirement for the 360 photo booth is 2500mm, with the maximum spread being 4000mm. The arm is completely adjustable, so if you are short on space you can pull the arm right in, and if you have lots of space you can create a really cool wide shot!

The mount we provide is a ball head mount, so you can quickly adjust the camera/iPad to cater for all heights.

The system is covered under a 12 month warranty. Also included for the first 12 months is our amazing technical support. 9am-11pm (GMT) we have a dedicated technical team on hand ready to help whenever you call.

The 360X is powered by an IEC cable, so you just need to add the corresponding cable for your country.

Yes. With the Dreambooth control box you can set how fast or slow you’d like the arm to spin.

You can even do 180° to provide your clients with 2 services from just 1 investment.

Our customers like to use a minimum of 2 members of staff. One to guide people through the experience, and one to manage the line of people.

Our shares are done digitally, usually by email or SMS. Shares are placed in a queue until the booth finds an internet connection, at which time it will send videos to your clients. Live Facebook, Instagram or Twitter sharing requires a live internet connection.

*SMS sharing is a Pro Version Feature of the Ipad system

Extra lighting is not necessary in normal conditions; if you are in a particularly dark area, we recommend you use an LED panel(s).

The 360X fits in most big cars. If it doesn’t fit into your car, most customers hire a vehicle on the days they have events. This way you don’t need to invest in a 360X and a van.